Over the last weeks, the tiny little monarch larvae in our garden grew and grew. And they ate a lot! Some of our milkweed plants look pretty sad with few leaves remaining and their tops chewed off. But what do we care? We are happy that our monarchs are thriving. When we checked on one milkweed stand last week, we found half a dozen larvae munching away. The biggest ones are now at the fifth and last larval stage. They usually sit on the underside of a leaf that they clipped slightly at the stem so that it hangs down and conceals the big caterpillar.

The beautiful monarch caterpillars. A second stage larva on the left and two 5th stage larvae. The one in the middle sits under the leaf that is cut so that it hangs down and hides the larva that eats away on the tip of the leaf. The caterpillar on the right has perhaps already started to wander.

These big guys were usually gone the next day. But we didn’t have to worry about them. When these caterpillars are ready to pupate, they enter a wandering phase during which they leave their food plant and look for a secure place to enter the next stage of their life, the pupal stage. Despite searching carefully, we did not find a chrysalis (this is what the pupa is called) in the garden.

To possibly observe the pupating process and to see the chrysalis, I took one of the biggest caterpillars home and then with me to work. I gave him (or her, of course, we can’t tell the sex of a caterpillar) a bouquet of fresh milkweed leaves and waited. The first night and much of the morning, he methodically chewed away on leaf after leaf. Then, while I was attending a series of talks, he decided that it was time to wander. And he somehow wiggled himself out of his cage — oh boy! After searching the entire office twice, my colleague found the caterpillar crawling on the underside of her desk on the other side of the room. These guys can run! Back in a more secure cage, the caterpillar went home with me again. 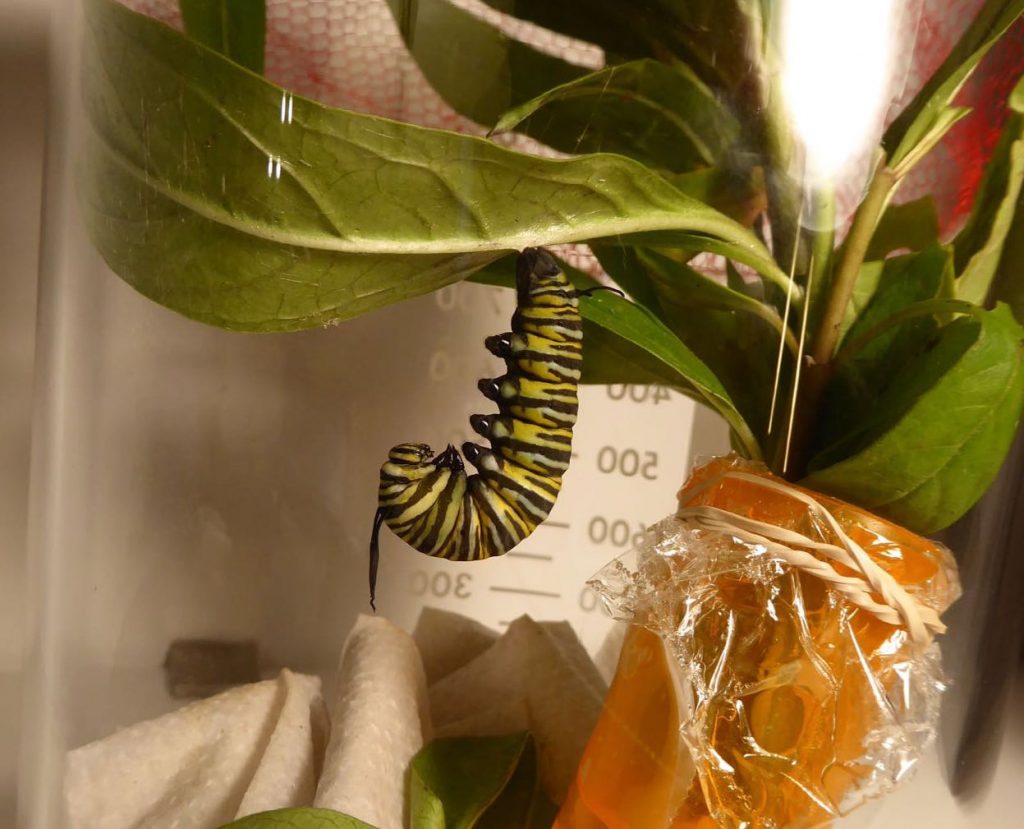 The caterpillar in his cage (a beaker) has used silk to attach himself to a leaf. He  is getting ready to pupate.

Over night, he settled on a leaf and was now attached with his rear end, hanging head down. He was no longer wandering, but he was still moving, curling and uncurling, and at times he trembled a little as if he was shivering. My butterfly-expert colleague informed me that this monarch was now in the pre-pupa stage. We had no idea how long this stage would take, but it was definitely time to keep an eye on him. Finally, a little after noon, the pre-pupa got a little shorter, uncurled completely and the caterpillar skin split on its back side to reveal the blue-green surface of the pupa underneath. I was so lucky to look at him just this moment. What happened next took all of 2 minutes and 30 seconds and I caught it on my cellphone camera. (A Thank You to all engineers who made this possible.)

Monarch chrysalis are amazingly beautiful with their lovely blue-green color and golden specks. What is going on inside is even more wonderful. Over the course of ten days or so, the larva will completely disintegrate and regrow as a butterfly. It is a privilege to get a chance to observe this metamorphosis, even if only from the outside.
Of course, I hope that I will also catch the moment when the butterfly emerges from the pupa. In any case, I will take a picture before we send him on his way to Mexico. You will see it here. 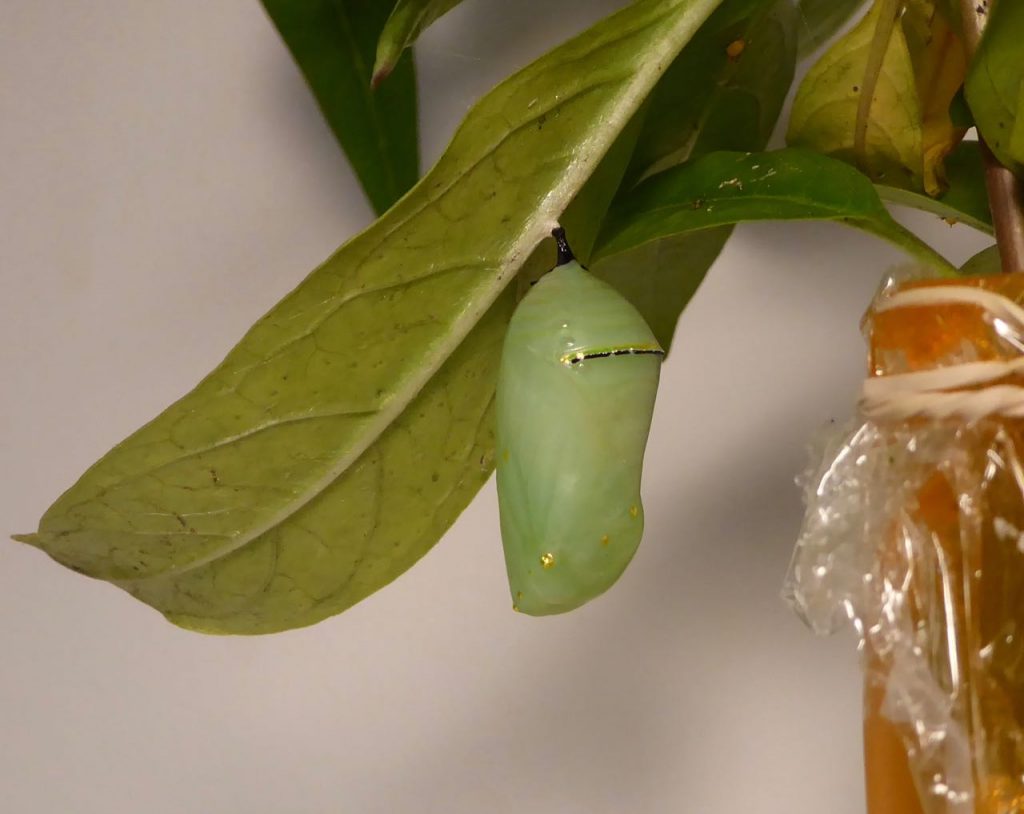 The chrysalis on the next day

LaGuardia Corner Gardens is an award-winning community garden in the heart of NYC’s Greenwich Village. It is a place of natural beauty, where the visitor can find an oasis of calm in urban surroundings. Read more...

The garden will be open on Saturday and Sunday afternoons from 2-6 PM and every weekday evening from 6-8 PM. If the gate is open, please come in any time.

We are looking for new gardeners and volunteers!
If you are interested in gardening with us, please contact us at LGCgardens@gmail.com or fill out the application form that you will find if you click "read more" above.